After nearly two years of dealing with the various bureaucracies in Lane County, we finally received a building permit, and immediately started the re-birth of our cabin on the beach.  Obviously the first task was the demolition process, which surprisingly, lasted just two days.  All of the history, everything, gone! 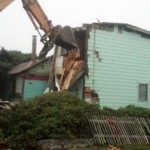 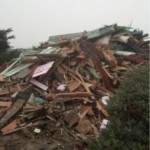 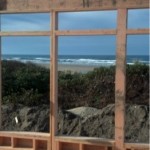 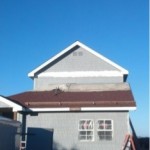 But, as quickly as it disappeared, the beginnings of the new Traxler’s Surfside Cottage started to emerge.  The local Contractor has been doing a great job, and progress to date has gone as expected.  From foundation to framing, little glimpses of what to expect started to show.

This is the first view from the new living room which certainly is going to achieve our first design objective – bring the ocean views into the cabins living environment.

As framing continued, and the second floor was now framed, the upper bedroom and deck views got everyone on the projects attention.

Enthusiasm to see the end product has been great, and progress continues towards our projected late April completion date.  Our hope is to have the cabin ready for my parent’s wedding anniversary (their 69th); as they have spent the vast majority of their anniversaries at the former Traxler’s Anchor.  It is our goal to allow them to have the very first at Traxler’s Surfside Cottage.

As of the first week in March, interior painting has commenced, and the exterior is ready for paint, but hinges on cooperation from Oregon Coast weather.  All of the interior materials (cabinets, doors, flooring, appliances and fixtures)  have been selected, and are awaiting the completion of the initial paint phase.  As I was writing this, an email arrived with the first exterior paint photo.  It has started today, the 12th of March.

This entry was posted on Wednesday, March 12th, 2014 at 12:04 am and is filed under Traxler's Surfside Cottage News. You can follow any responses to this entry through the RSS 2.0 feed. Both comments and pings are currently closed.